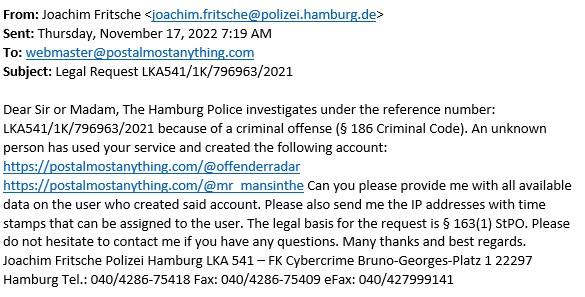 Today Post Almost Anything suspended the @mr_mansinthe account for admittedly posting the name and picture of a 17 year old girl. That user created three posts and described the victim of those posts as a 17 year old girl in each one. We took a look at the author's work after receiving a complaint from a police officer in Hamburg, Germany named Joachim Fritsche.

We have not suspended the other account that Officer Fritsche complained about due to it not having any data associated with it which matches the @mr_mansinthe account. The IP addresses and email addresses are different but there was a man they were both talking about in all their posts. That man appears to be the target of a smear campaign but we can't conclusively say if that is the case or not. It seems like one of those pedophile smear campaigns, but we are not sure what record if any the target has because Germany has no public sex offender registry website. We also are not aware of any public background check services in Germany capable of helping us figure out if that person has ever been convicted of a sex crime.

We have deleted two posts created by that other account for using the same body but we don't consider just two re-posts disruptive enough to justify suspending an account. We will send a message asking the account holder not to post the same person again and to remove his or her work if it contains any false information.

As is often the case with clear cut cases of user abuse which robs us of our valuable time, we are making publicly available all known data we have associated with that user. We do this to discourage other people from abusing our services. Usually all people have to worry about from a website is getting their account suspended if they break the rules. In our case your account gets suspended and your information gets published. That information in this case is as follows:

While we believe in doing what we can to discourage abuse of our services, we do not provide government agencies with testimony or affidavits because we are fundamentally against the prison industrial complex. While we don't support the posting of inflammatory accusations against minors on our platforms, we also don't believe in putting people in jail for such things. While we realize law enforcement agencies might find articles such as this useful we also know that without us officially authenticating the information contained within it is all hearsay. Plus, the IP address appears to be a VPN endpoint unlikely to be of help to the authorities. Perhaps they will have better luck working with Google whose YouTube website currently hosts similar material or 123site.com which is hosting a fake law enforcement website with what is clearly intended to be a sex offender notification.

We don't treat all accounts which blast the same person the same way because if we did then someone could get every piece of criticism directed their way removed simply by signing up, posting something that clearly violates the TOU, and accusing it all of being the work of the same person.