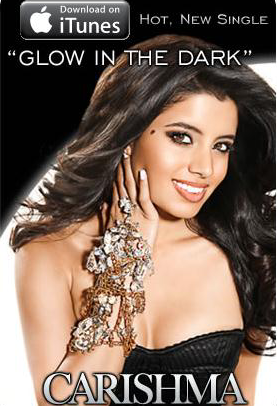 Last night I was bombarded by commercials for Snap On Feathers containing an endorsement from what looks like a fake celebrity named Carishma, so I decided to do some research and what I found backed up my suspicions. For those of you that have not seen this ad (video embedded below) Snap On Feathers are cheap hair accessories for women that want to sport a cheap Chief Osceola look with feather equipped hair extensions that snap onto their hair easily. To promote them they have been buying ad slots during late night Beavis and Butthead re-runs on MTV featuring a whose been criticized as a cheap Britney Spears ripoff (1) named Carishma. Upon further review it appears that Carishma may have been manufactured for the purpose of promoting Snap On Feathers.

If you've seen the commercial by now you probably wondered who Carishma is because like more than 99% of people you had never seen before. That is most likely because her first single "Glow in the Dark" wasn't released on Itunes until September 19th of this year (2) just a week before Snap On Feathers uploaded her commercial to You Tube on September 26th(3). September must have been a big month for Carishma because everything I could find about her on Google appears to have been created that month or since then. Things like her website (4), MySpace Page (5), and Facebook Page (6) none of which have any corresponding results in Google's cache dating back before that month. Her song has gotten over 180,000 You Tube views (7), but most of them only started looking up her video because of the commercial and a lot of them just wanted to see if she was real. She looks like she could be real, real enough to trick most people into thinking that she is real unknown with just one horrible song, no music video, and whose only uploaded "live performance" is the same footage used in the commercial all of which looks like it were shot on a cheap sound stage in the early 90s with a crowd full of extras putting their hand in air like they just don't care.

There are more weird coincidences that make Carishma look fake and likely manufactured. Her domain name was created (8) in April of this year just three weeks after Snap On Feathers created their domain (9). Her single was produced by the same company as Britney Spears (10) and countless unknown talents as well, so they had everything they needed to legally ripoff a Britney Spears song quickly to give it some features that might appear familiarly like real pop to some people. Snap On Feathers themselves appear to be marketed through several affiliate spam sites featuring bogus positive reviews. Sites like eFeather Hair Extensions(11) and Snap On Feather Reviews (12) both of which contain the same picture of a woman, but as a model on eFeather and a blog author on Snap On Feather Reviews. Those sites appear to be the work of online marketers and search engine optimization (SEO) people looking to establish control over search results for "Snap On Feathers"(13) early in the product life cycle. Snap On Feathers is also based in Fairfield, New Jersey which is also Carishma's home town according to her Wikipedia page (14) which was created in October. It is not often to see someone establish a Wikipedia presence so quickly without being popular and SEOs are notorious for spamming Wikipedia with marketing material like her profile. Her Facebook page(15) also has an invalid link (16) posted in the about section as where to buy her music which redirects to an Itunes affiliate directory URL (17) which is extremely rare for anyone whose business is based on selling music.

I cannot say for sure whether she is real or not, but she certainly looks to me like a fake singer created for the commercial. Perhaps the best evidence against her is the poor quality of her only known song which is so bad it is hard to imagine anyone seriously releasing it to sell. It is more likely that Snap On Feathers created Carishma as part of their marketing plan around the time the product was invented and released her single just enough time the commercial so that they can technically state in their ad that she is an "up and coming artist" instead of an actress. It makes sense because it is far cheaper to create a bogus celebrity to pitch your product than to pay a real one to pitch your product, especially a product as cheap and tacky as Snap On Feathers.

To Be Continued Or At Least Proofread...

Snap On Feathers Commercial with Carishma

her parents (khubanis) own the company, telebrands, that produces the snap on feathers and her mother is a b-list singer from india. her father was sued several times for the awful products her sells and was even caught saying that he made millions selling 'cheap sh*t americans will buy'. unlike GaGa who also comes from an affluent family - she never worked hard. went to fordham and then transferred to nyu and graduated in 6 years. her name is Carishma Khubani. much more talent out there. she's just another spoiled girl who's dad paid for her way to stardom.

LOL! Thanks for the info, maybe that explains why our Google ranking for Carishma went up while our overall impressions dropped 94% over the past 30 days. She should have joined NLLCAP to save face, but the really funny thing is that StupidProductWatch is a test account owned and operated by the same co-owner of No Limit List that is writing about himself in the third person as I type.

What I found really interesting was the legal threat we received a couple days after I wrote that. The threat told me to take this down immediately or a law firm would take action to protect their clients.

Too easy to notice yet not noticed enough.