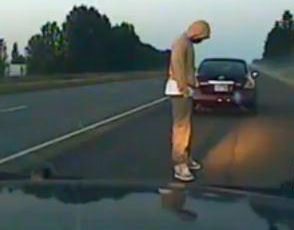 The Harassment of Cliff Harris Documented by ESPN

Eugene police need to stop harassing Oregon Ducks pre-season All American cornerback Cliff Harris. There might not be many black people in Eugene, but surely officers of the Eugene Police Department (EPD) and Oregon State Police (OSP) are capable of finding lesser members of society to satisfy the urges of their racist desires.

For those of you who don't watch football or follow inferior teams here is a rundown of the harassment Harris has suffered so far. The first incident took place this past summer when Cliff was just driving down a deserted highway minding his own business when OSP Nazi officer David Ray Stallsworth pulled him over, burglarized his car, and kidnapped him all because Stallsworth thought he might have been driving just a little bit over the speed limit. Then this past week Cliff was minding his own business driving down the street in downtown Eugene in a convertible when a EPD Nazi officer harassed Cliff again just because he thought it looked like he was not wearing a seat belt.

Now either Cliff Harris has the worst luck of people the police choose to treat like criminals instead of busting crackheads or he has been racially profiled twice in past six months alone. In the first incident Stallsworth could clearly see not only Cliff, but two other black men in the vehicle as well when he walked up to the driver's window if he did not notice before pulling them over which is unlikely. The second incident should erase all doubt in your mind because as the police statement indicated he was driving a convertible which made it easy for anyone to see his darkness clear as day like JFK's face from the book depository and that fascist pig zeroed in on him like Lee Harvey Oswalt.

Due to these clear cases of racial profiling a new policy must be mandated for police in the Eugene area so that they can properly identify Ducks players and treat them as they deserve to be treated. The first step is to make sure that every Ducks player carries with them an Official Oregon Ducks Football Team Membership Card (if no such card exists one should be made). The second is to require any police officer with reasonable suspicion to believe that someone is an Oregon Ducks football player to ask the subject two questions as follows:

1. Are you or have you ever been a member of the Oregon Ducks football team?

2. Do you have an Official Oregon Ducks Football Team Membership Card?

If the subject can confirm that they are in fact a card carrying member of the Oregon Ducks football team the officer should then be required to let them go about their business. I propose that this policy should put on the ballot in the next election to reduce racial profiling and make Eugene a sanctuary city for football players.