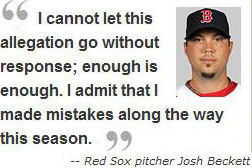 Boston Red Sox pitchers Josh Beckett, John Lackey and Jon Lester are accused of drinking beer in the dugout during games. The allegations were made by employees at Fenway Park who said that the pitchers would take cups from the dugout, walk back to the clubhouse during the 6th inning, fill the cups with Bud Light, bring them back to the dugout, and drink them.

One Red Sox employee was quoted as saying that they drank because they got bored on nights that they were not pitching and that they didn't even try to hide it because seeing the same three guys go back to the clubhouse at the same time game after game made what they were doing obvious. Others say that they ate fried chicken and played video games while drinking their "rally beer" in the clubhouse.