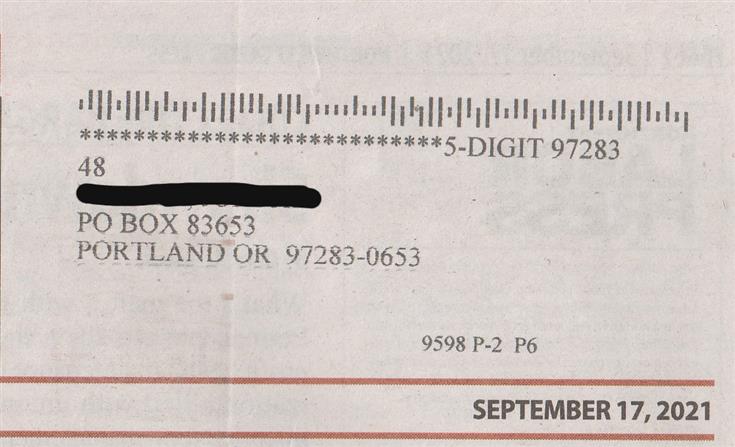 I've had a post office box at the Creston Post Office in Portland, Oregon off and on since 2008. During that time period I can't count how many times I've found mail addressed to other post office boxes in my box. I try to get there once a month and when I do there is almost always mail addressed to a different box in my box. Usually I just hand the mail to someone behind the counter and tell them to put it in the right box, but sometimes I don't look at it until after I leave the post office. Today was one of those days, but instead of turning around and going back I decided to do something different. I decided to take the mail home with me so that I could scan it and upload the images as proof that you can't trust this post office to deliver mail to the right place.

The first item I scanned was a copy of the Northwest Labor Press which is bi-monthly newspaper that people can subscribe to for $15 a year. It was addressed to a box number which varies from mine by one digit. Obviously some employee was sloppy and probably in a hurry. Being off by one digit can be an understandable mistake for something as unimportant as a cheap newspaper, but this post office does this stuff so often that it really is inexcusable.

The second item I scanned was an AARP Bulletin which is a free monthly magazine for AARP members. It was addressed to another box number which also varies from mine by one digit, but in a different way. These two were just from the past month. Most months I find at least one piece of mail addressed to a different box. Usually it is just harmless newsletters, newspapers, magazines, or junk mail, but I also get what appears to be important business mail sometimes.

I am not stealing these two items. I intend to take them back to the post office next time I go there and give them to someone behind the counter. I'm just taking a little longer than usual to expose the problem. If you are the rightful owner of either of these items I apologize for the inconvenience and I hope that you consider exposing this problem important enough to go without your reading material for a little while. I thought about marking them as undeliverable, but that would result in them being sent back to where they came from. I also thought about putting them in a mailbox closer to my home, but I fear the post office would treat them as new mail using old postage. Seems the best way to get these items to you is still for me to just hand them to a staff member.

What really concerns me is how much mail addressed to me has not arrived in my box. I use the box so that people wrongfully listed on STDCarriers.com can have clean test results sent in from their doctor in accordance with the site's removal policy. Sometimes people email me claiming to have sent in results which I have not received. Others email me about other websites in my network claiming to have sent me letters in support of their claims that content should be removed. In either type of case I sometimes get accused of denying my receipt of mail due to either not wanting to admit that I got something or by misplacing it myself which is not the case. If you've sent mail to any website which uses P.O. Box 86653 there is a good chance this post office gave it to someone else.

What to Do with Misdelivered Mail

I give this post office 1 star because they have a simple task to do and fail frequently.

We have more proof of this practice continuing as recently as a couple months ago, but our scanner is broken. Tried complaining to the front desk.