FoulSpeakers.com received a notice from Google today saying that they had removed a link to an article about HULT Private Capital in response to a copyright complaint made under the Digital Millennium Copyright Act (DMCA). Upon review of the DMCA complaint we have concluded that it was made in bad faith. We base that conclusion on the unusual basis of the complaint and fair use doctrine.

We have gotten many DMCA notices from Google over the years, but they usually involve photographs of people. Usually we suspect the complaints of being false because the person in the photo is the one making the copyright claim and the the photo appears to have been taken by a third party. In such cases the person that took the photo is the copyright holder, so the person in the photo lacks standing. This is no such case. Google provided us with a link to the DMCA complaint (https://lumendatabase.org/notices/24782872) in which HULT stated, "This URL has used copyright material directly from the HULT Private Capital website which includes text, content, logos, and imagery of website, without permission." We have never seen a DMCA complaint based on text from or screenshots of website talking about the website claiming copyright before. Probably because most companies see the lunacy of making copyright complaints based on direct quotes from or screenshots articles criticizing them when those screenshots and/or quotes are being used for the purpose of comment and/or criticism covered by the fair use doctrine.

Section 107 of the Copyright Act (https://www.copyright.gov/title17/92chap1.html#107) says, "fair use of a copyrighted work, including such use by reproduction in copies or phonorecords or by any other means specified by that section, for purposes such as criticism, comment, news reporting, teaching (including multiple copies for classroom use), scholarship, or research, is not an infringement of copyright." We can think of few examples for which the fair use exception is more applicable than the limited reproduction of policies from a corporate website for the purpose of criticizing the corporation.

Unfortunately, companies like Google have a habit of honoring DMCA complaints with no regard for the rights of those they are made against. They simply remove the material covered by the complaint and tell the person whose content was removed that they can file a counter-notification. The counter-notification process requires people to reveal their full names and swear that their counter-claim is true. This transparency is a big motivation for filers of malicious DMCA complaints. Often the filers don't know the identity of the critic and are trying to figure it out. Filing a DMCA complaint means that the critic will have to go along with it or expose their identity and risk retaliation.

Fortunately for us we have found a way to restore content to its rightful place on search engines without filing a counter-notice. We simply change the URL and wait for search engine bots to re-index the content at the new URL. We expect HULT to file another DMCA complaint to get the search engine result for the new URL removed, so our system is programmed to change the URL periodically so that companies like HULT will end up stuck in an endless cycle of filing DMCA complaints to get the results they seek and even those results will be temporary at best.

To better help Google protect our right to expose HULT for this practice we are not including any screenshots of or direct quotes from their website in this article. That way they can't possible claim that PostAlmostAnything.com contains any text, content, logos, or imagery from it.

HULT also lodged an allegation that the complaint was defamatory. We are going to remain silent on that issue. Foul Speakers is a niche search engine and web archive kind of like a hybrid between Google and Archive.org. We have a bot that monitors the internet for complaints against businesses among other things. When a complaint is found a screenshot is taken and archived along with text from the page with a link to the source. In this case the source was a complaint on Gripeo.com filed by an anonymous user. We do not assert that any content found elsewhere on the internet is in fact true or otherwise accurate beyond being an accurate snapshot of what someone else said.

Although we are not in a position to judge the veracity of the original work in general, we can weigh in on the legitimacy of previous DMCA complaints made by HULT. The anonymous author posted a screenshot of a DMCA complaint similar to the one we received. We believe that one was most likely just as bogus.

Good points, people frequently abuse the DMCA figuring at least Google will remove stuff rather than fight it. Then webmasters that know better have to take steps to thwart it.

We got a bunch of emails from someone complaining about the page on Foul Speakers that was the subject of this bogus DMCA complaints. The first message from williams.john83e@gmail.com read as follows:

"I am writing to formally inform you about this website only created to expose my privacy, my home address (in London and in Hong Kong residential address), and its defaming me saying that I am a SCAM. This website is tarnishing me as a person. They should not expose my residential addresses and my name because it should be the company name only, right? Also, the people behind this should file a case to the proper venue but instead they made this website article, because they can't prove that I am who they claim me to be. They should bring this to the court instead of posting, right? Please remove this from the Internet and to the servers! I am looking forward to your consideration. "

The next message was as follows:

"Follow up please. My family is in danger!!!! This is my home addresses!!!! This is a PERSONAL IDENTIFIABLE INFORMATION (PII) I don't permit my home address posted in any website!!!!! I dont have the funds to go to the court!!! And this issue doesn't need one because it is PII!!!!! Please DELETE!!!!!!! Asap"

We responded by explaining that we have the right to host PII and that we won't give his new claims any more credit than we gave the bogus DMCA which is no credit whatsoever.

So following a lengthy back and forth with Williams our last message from his was as follows:

"Please take it down with or without payment. Since there would be no amicable settlement in this problem, I will escalate infringing content you made to the web hosting companies to ask a copy of your identity and forward it to the authorities. I don't mind if it takes time but, important is to hold you liable for your actions. It's gonna be a long journey but it is making sure someone will regret it. "If there are legal problems regarding HULT, it can be brought to the courts to have a solution and put behind bars the proven criminals however, someone made a wrong decision making him a person in conflict with the law. What you just made in the article is a cybercrime." Goodluck. You do not need to respond anymore. "

Mr. Williams then sent a complaint to our domain registrar which was forwarded to us. That complaint is as follows:

"May I know and can you please help me identify what are my options because this article is a business competitor who wants to tarnish my brand but also tarnishes me as a person and exposing my residential address. I already emailed the webmaster but they do not want to remove it because it is earning money out of it. I do not have the funds to go for legal route and this website hosting company is in different country. Please advise thank you. "

The main issue of Williams' gripes seem to be that he claims a former business associate is defaming him and that we don't have the right not to remove his home address from the article. Under Section 230 of the CDA we are not liable for either and therefore don't have to remove anything.

Mr. Williams sent us this screenshot of our registrar's response to his complaints. In it they clearly give him a generic boiler plate directive to take his gripes elsewhere. The right move since the addresses included in the article at issue are also available on his website's contact page which clearly negates his claim that their publication is a danger to him or his family. 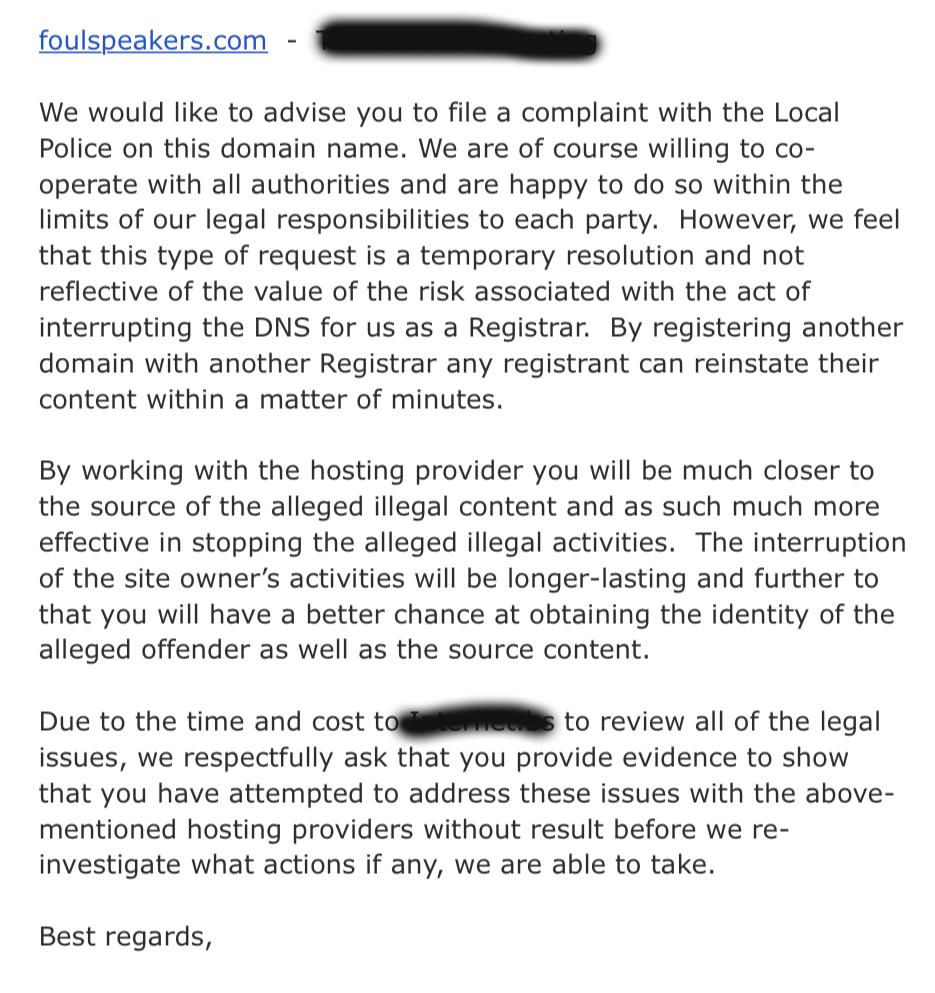 This guy just won't stop trying to trick people into thinking a negative review of his business is somehow illegal. He is now a full blown snitch hence a new post in a different category see https://postalmostanything.com/4054/john-williams-of-hult-private-capital-crying-to-cops