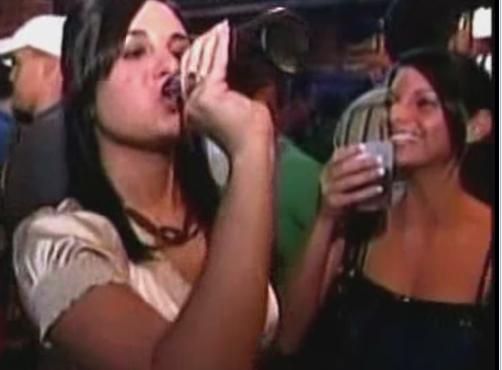 Bill O’Reilly’s expert scientific analysis of alcohol, college girls, and sex reveals that the number of promiscuous girls on campuses across America increase with binge drinking. Bill speaks form years of experience passing out and having to ask people who they were in the morning. Gretchen Carlson joins the discussion acknowledging that she experienced binge drinking first hand on the Stanford campus and after showing footage of hot college girls getting plastered on cheap booze Margaret Hoover joins the discussion recommending that "every young man going to college in a couple of weeks should look at this video" of attractive coeds because the best way to "be prepared for these situations is to watch it before you are there" so that "by 3am when you’ve been going since 8pm" you have a game plan.

Gretchen Carlson then shifts the discussion from hard drinking to warning parents about their daughters futures before Bill O’Reilly chimes in with a list of consequences inflicted on at least a dozen promiscuous girls that he’s known including abortion, STDs, unwanted babies given up for adoption, a baby in a "single mother home", and degradation of their reputations for doing what they did. Margaret Hoover backs up Bill’s facts stating that too much booze can result in really dangerous stuff like falling, hitting your head, and getting into fights.

It was based on a survey by Mom Logic