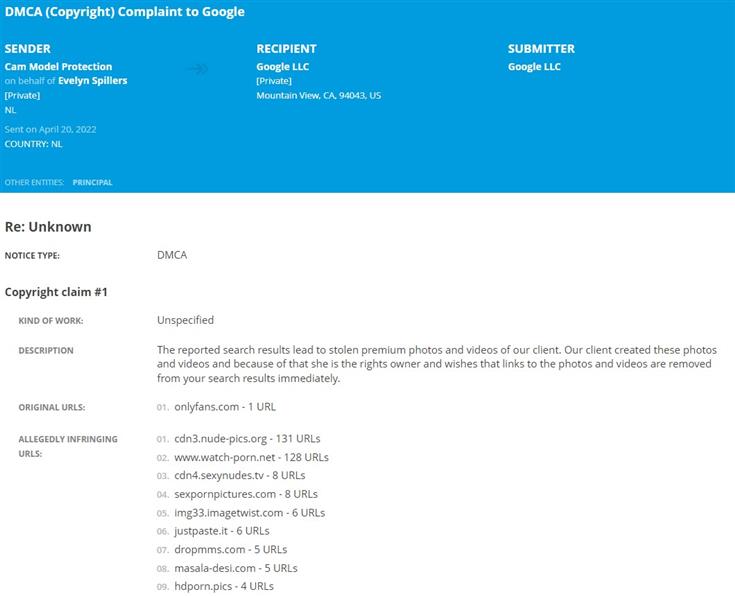 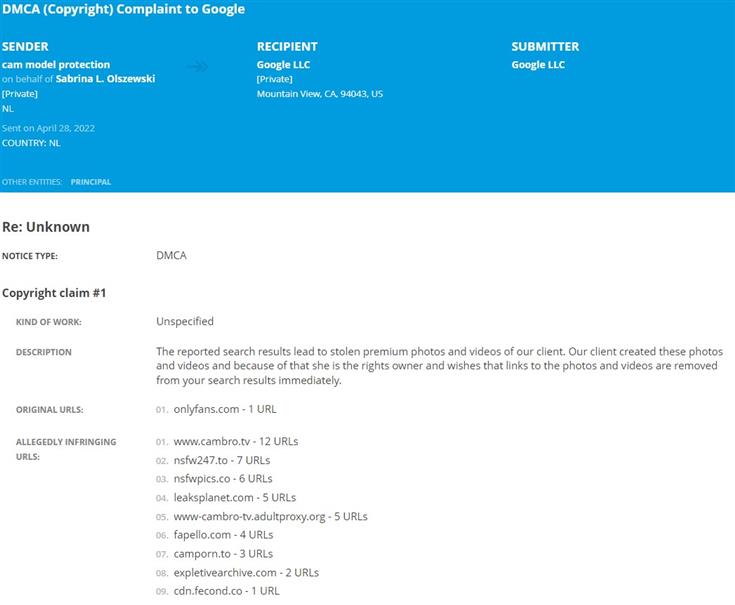 These people thought it would be a good idea to hire a Dutch company called Cam Model Protection B.V. to suppress information about them from appearing in Google search results. The company seems to function by spamming Google with Digital Millennium Copyright Act (DMCA) takedown complaints whenever they find images of their clients appearing on sites without their permission regardless of context. The context is key because it makes all the difference between fair use and copyright infringement. To their credit, it appears that most of the URLs they submit to Google are probably cases of legitimate copyright infringement claims, but the complaints sweep too broadly which is our gripe. We feel that this company is abusing the DMCA to get Google to remove pages that criticize their clients on the grounds that they include copyrighted images.

As you can see by the carousel of screenshots on this page above from DMCA notices filed with Google by Cam Model Protection, most of the URLs they are complaining about appear to be adult websites hosting content originally created by their clients for commercial gain elsewhere without permission in violation of most applicable copyright laws we know of. However, you will also notice the domain name eXpletiveArchive.com among URLs listed even though eXpletive Archive is an archive of people saying specific things for which they are being criticized. For their clients to show up on eXA in the first place they typically must post something on social media containing an expletive, ethnic slur, homophobic remark, or an accusation of some kind. Any comment containing an expletive is ripe for criticism on such grounds as are comments containing ethnic slurs and homophobic remarks. The criticism being that people should post that stuff online. When a client of Cam Model Protection posts something on social media containing certain things, we have the right to criticize them for it. They cannot absolve themselves of criticism simply by pointing out that amongst the criticism is a copyrighted image they produced for their own commercial gain that we are using without their permission. They can't do that because we are clearly using it to identify the subjects of the criticism and not to profit off copyrighted works. If you appear in a newspaper and someone posts your picture from that paper for the purpose of criticizing you, the paper cannot then file a legitimate copyright complaint just because they own the rights to the image.

Even if the DMCA complaints were legitimate, using Cam Model Protection would still be a bad idea because they submit the full names of their clients to Google with the DMCA complaints. The webmaster then receives a notification in webmaster tools that a page has been removed due to a DMCA complaint. That notification includes a link to the Lumen Database which includes a copy of the DMCA complaint complete with the full legal name of the client. Judging by the nature of their clients' work, we don't think having their full legal names publicly associated with their work to be something they would consider an improvement in their circumstances over seeing eXA on Google when people search for them. Cam models often operate behind a cloak of anonymity that allows them to feel comfortable performing in all kinds of ways without anyone knowing who they really are. To illustrate what we mean, check out the following examples of DMCA complaints we've received complete with the full names of the clients as provided to Google by Cam Model Protection:

Relevant Comment: "The only thing I know about Jeffree Star is that he was screaming “niggers” at some girls in a video so I’m quite confused when I see him securing multi million dollar deals with makeup brands like Morphe. White people really get away with anything" - @Lexual__ elexus on Twitter

Relevant Comment: "I wonder what would happen if I told the story of how a UH professor grabbed my tits in class and got away with it after the University forced me to stay in his class for the remainder of the semester" - @boomshakhalaka on Twitter

Those are just the three most recent. More will be coming soon, especially if Cam Model Protection files any more complaints. For a company that promotes privacy protection among the perks of its services they sure have a way of showing it.

If I did that kind of work I would prefer to risk piracy to protect privacy.