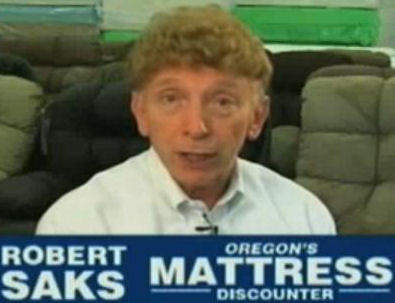 Robert Saks of Robert Saks Mattress Company gave new meaning to the question "does the carpet match the drapes?" with his toupees that never matched his real hair color. He had at least two versions of his horrible toupee commercials one of which featured a reddish light brown toupee embedded below and the other which I couldn't find online featured a not quite so horrible grey toupee that still stood out as not being near as white as his real hair which was visible from above the top of his ears on down to his neck.

Eventually Robert Saks must have realized how stupid he looked in his commercials and released a new one featuring himself wearing an Oregon Ducks hat (http://www.youtube.com/watch?v=2fqxXNsC3Z8). The last commercial of his that I ever watch was his hat commercial and that left me wondering whether or not the toupee was an intentional disaster created by an old man with a sense of humor.

Here is a link to the real commercial https://www.youtube.com/watch?v=4ZIdAAY8DuQ