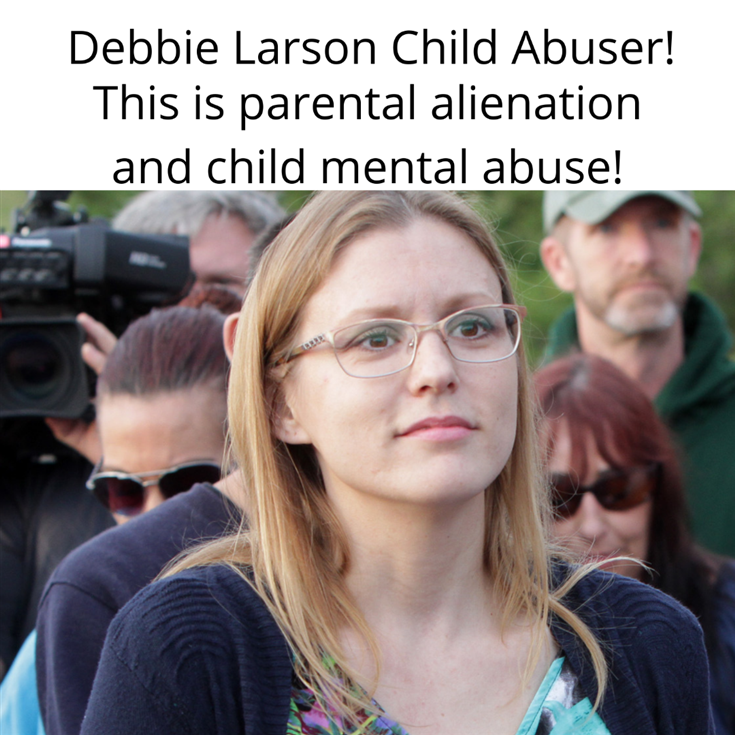 This is what child abuse looks like in Massachusetts.

Deborah Larson is an ex-stripper at the well renowned Ten's Show Club in Salisbury, MA. This mom of this innocent little one has taken it upon herself to destroy her daughter's affection towards her father by making her fear him. This little girl was convinced by her mother, Debbie Laron of Georgetown, Mass., that her father was a thief and he is and was an awful person. The youngster was subjected to false information showing some website site obviously intended for adults to BASH her father and destroy any normal father-daughter relationship. This is just some of the video evidence gathered, and the rest is too graphic and frankly too disturbing to post. It is essential to point out who the abusers are in our society to eradicate this behavior. In this case, it is the mother, Debbie Larson of Georgetown, who has sponged off the government for years with a fake disability. It is utterly amazing how she is disabled but runs a furniture refurbishing business on the side and does quite well for herself. I believe this is called FRAUD!

What really makes this absolutely disgusting is when Deborah clearly conspires with her daughter, who is six years old, (at the time of this recording), to STEAL a ring from her own father. Where are the moral teachings here? It is okay to steal? I don't know about you and whoever is reading and watching this, but this, my friends, has crossed the line. Deborah is teaching her own daughter to spy, steal and HATE!

Deborah Larson is also a victim of child abuse; her abuse was not #parentalalienation but child #sexualabuse and neglect. (Seems interesting how so many strippers who dance naked for money were, in fact, sexually abused in some sort) However, Debbie most likely has not crossed that line yet with her daughter but has abused her daughter in a way that she has been systematically broken down. When you do this to a child, that child has difficulty developing in a normal fashion. The child feels it is now okay to steal and will never trust because her mother brainwashed her into believing that a loved one has hurt her. She will also always feel of no self-worth because if her Dad is a bad person, she must be at least half bad.

This type of trend of a parent abusing children seems to recycle itself, and the chain needs to be broken, and guilty parties need to be brought to justice. The victims need to be safe from their abuser, and this vicious cycle of repeating #mentalabuse needs to end.

Child abuse in any form is unconscionable, and people like this need to be punished.

Child abuse is the non-accidental commission of any act by a caretaker upon a child under age 18 which causes, or creates a substantial risk of, physical or #emotionalinjury