Free Speech is Under Attack

Parler is Down: Try Other Free Speech Platforms 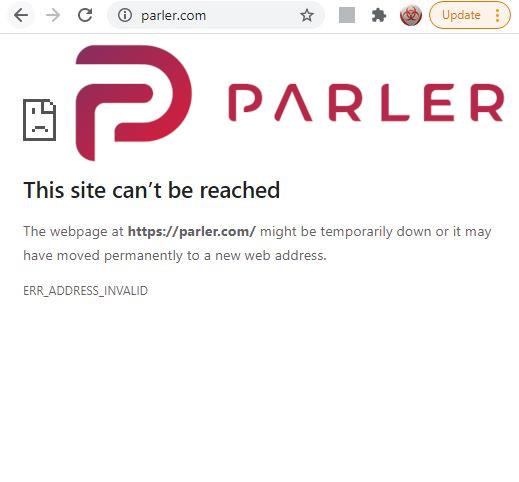 Parler will be down longer than expected

Parler is down because Amazon suspended their account. The CEO of Parler has said that it will take awhile for his company to get the site back online. If you miss your Parler account you should try other free speech friendly platforms. Platforms like PostAlmostAnything.com where you can literally post almost anything. Post Almost Anything is more like Craigslist than a social network, but it has something that Parler does not have. It has a host that is free speech friendly, it would be back up much faster if taken offline, and it was built by someone with a proven track record of supporting free speech online.

Post Almost Anything is not hosted in the United States because we know how unreliable stateside hosting companies can be when it comes to free speech. They are always just one frivolous court order away from shutting you down or turning over your customer's data. By hosting offshore we are able to work with companies that will not cave to pressure from American lawyers or the United States government. This enables us to protect your First Amendment rights without worrying about having to defend ourselves in an American courtroom just to survive. When our hosting company gets a court order from the United States they don't have to do anything. That allows them and ultimately us to ignore legal threats even though the ownership lives in America. If the federal government wants something done about anything on the website they need our cooperation and that allows us to establish terms for that cooperation. Some might think that if a person is in America that all one needs to bully them is an order from a court in that country. Normally that is true, but not when the target of that order is a computer not located in America and an American citizen that realized long ago that human beings with free will can exercise that will as they wish regardless of others exercising their free will by telling them they can or cannot do something. They might try asking a court to say that because they live in the country that they have to do what it says. That assumes that the people targeted by the action will blindly obey the court. That is not the case here. We will not obey a court that demands us to do anything unless that court shows that the post or user in question is in breach of our TOU. If that does not happen we will simply tell the court no. Some might shake their head at this and say that they would just ask the court to hold us in contempt. That is what most lawyers would do because most of them suffer the mental handicap of believing that they must conform their behavior according to the written words of other. Unlike them we know how to do time, we have done more time under far worse conditions than the court is capable of ordering, and throughout that time we were able to keep the site they were targeting running even after a federal judge ordered that the owner have nothing to do with it as a condition of pre-trial detention in a criminal case. If we could keep that site up and running the entire time that order was in effect what makes anyone think that trying to take down Post Almost Anything via a civil or criminal proceeding in an American court would work?

Even if someone in the United States were to be successful at getting our server taken down we would not remain offline for days or weeks like Parler. That is because we are not dependent on cloud services like Amazon Web Services. We use a single IIS server that is backed up regularly. All we would need to do to get back online would be to rent a new server with another offshore hosting provider and upload our sites to it. We have done business with companies based in Russia and Sweden that are notorious for hosting just about anything including pirated software/movies/music and terrorist websites. We would simply use on of those companies and would probably be back online in less than a day. There is of course a downside to doing things that way. Our sites are slower than our competition. This has led to posts on our sites not ranking as well on Google due to their page speed algorithm and it causes users to leave rather than wait for things to load even though loading rarely takes more than a few seconds. That can be a huge problems for social networks and chat services that people use for conversations. That battle for milliseconds leads a lot of sites to bite the bullet and use a cloud host like Amazon or Cloudflare. That is usually a good choice unless anything happens that leads to bad PR for those companies such as the Capitol Hill incident or the 8Chan controversy that led Cloudflare to stop working with that site. Cloudflare does not host files, but it provides a caching and routing intermediary that speeds up performance. The downside is that Cloudflare requires that their nameservers be used, so they can kill a site by not serving cached files or routing traffic to it. Because we have not caved and still host sites ourselves via offshore hosting providers we don't have those problems.

Post Almost Anything is run by the same people that are behind the internet's only STD Registry (https://stdcarriers.com) and the anti-police misconduct website Cop Blaster (https://copblaster.com). We began hosting the STD Registry offshore a decade ago after a lawyer sent Network Solutions a cease and desist letter. Network Solutions responded by telling us to remove a page from the site within 48 hours or face suspension. Our response was to move the site offshore within 48 hours and demand proof from that lawyer that the page violated our TOU in order for it to be removed. We eventually removed it once proof was provided, but the important takeaway from that is that we proved the money spent on that lawyer to have been wasted. Had that person elected to provide proof rather than seek alternatives the page would have been removed sooner. STD Carriers did go down for many years after the founder was convicted in federal court of making a threatening communication. That conviction would not have resulted in the site going down had it not been for the site being in the middle of a hosting upgrade and the old host not supporting automated monthly payments. Had that bust taken place a week later the site would not have gone down at all. Despite the FBI seizing all of the founder's computers in the United States they were unable to obtain any member data because all physical copies were offshore. Backups of that data were obtained from the host by the founder's lawyers and they never turned it over to the government. After his release, the founder created Cop Blaster to expose police misconduct in his case, the institutions where he did his time, and to provide a service for others to do the same. That act of defiance led to a charge of violating his supervised release conditions and a trumped up charge of assaulting a federal officer while awaiting sentencing on that violation. His legal team argued successfully that Cop Blaster violated none of his release conditions, but he was found guilty of violations for other things that the U.S. Probation Office would not have bothered arresting him for had it not been for Cop Blaster. All the government got at that time regarding the website was a temporary ban on posting home addresses of government employees as a new supervised release condition. While in pre-trial detention on the assault charge his cellmate wore a wire for the FBI after filing a false complaint saying that he had tried to hire someone to kill the judge (https://copblaster.com/blast/124/scott-joseph-franklin-is-a-wire-wearing-hole-rat). The recorded conversation did not backup those claims, but it did get him on tape badmouthing the judge in a way that made him feel that he could not get a fair trial as long as that judge were on his case. He had memorized the judge's home address and had been handing it out to his fellow inmates for over a year at that point. He sent a letter to that address asking the judge to recuse himself. The judge responded by recusing himself after ordering him not to have anything to do with his website and not to disseminate home addresses of government employees in any way. His response was to continue sending letters containing instructions to post comments on the site for him and give the judge's address to more inmates. Eventually he was offered a plea offer of time served after his legal team proved that the officer accusing him of assault were lying.

Our claims that we are better suited to protect free speech online than Parler, Gab, 4Chan, 8Chan, or anyone else are well founded. We know what we are doing, we are setup to survive takedown attempts, and we have a proven track records of resisting the government. If you are looking for a place to exercise free speech this is it.