Fallout 76: A Colossal Problem Bug at Monongah Mine 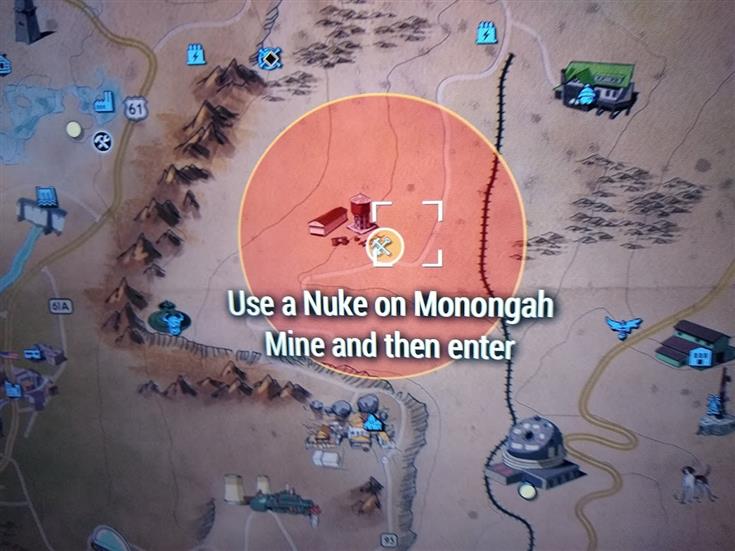 Something Sentimental Monongah Mine Nuke Prompt

Fallout 76 is full of bugs that make it one of the worst Fallout games of all time. Some of the bugs are purely technical while others are by design and arguably not bugs at all. This is likely the latter. It happens when you talk to Maggie at the Foundation settlement and agree to help her find out what happened to her father. That begins the Something Sentimental quest line which is really an event quest. The difference between an event quest and a normal quest line is not evident until later on and how you respond to the event prompt will determine whether or not you can complete the quest line.

Shortly after beginning the Something Sentimental quest you find yourself at Monongah Mine but it is blocked by rubble. Maggie suggested that you dislodge the blockage with a nuke. Hoping a mini nuke would suffice I went there and found out that was not the case. Then I realized I would need to launch an ICBM at Monongah Mine just to get inside. Launching an ICBM in Fallout 76 is no easy feat. You have to go to one of three bunkers with missile silos, clear out the enemies, and enter the correct launch code just to fire the missile. That might sound simple, but there are so many enemies in each bunker that no matter how many stimpaks you have it is not enough and even if you produce as much ammo as your resources allow you it won't be enough. Your best bet is to hope that you have saved up at least 15 plasma cores for your Gatling Plasma and bring plenty of melee weapons, but most importantly make sure you have the current week's launch codes. I recommend getting the code from https://nukacrypt.com/ because tracking them down manually would take hours. I've never bothered to track down the codes myself because doing so requires that you find all of the ghouls carrying chunks of the code and solving some sort of puzzle to figure out which order the code goes in. Then the code itself changes every week, so there is a good chance that trying to find out this week's code manually will result in not being able to find every piece or if you do find each piece you probably won't have the code long enough to use it before it expires. Then if you are able to launch a missile the bunker security resets which means you will have to kill the same enemies all over again to launch another one.

Anyway, back to the problem at Monongah Mine, I finally managed to nuke the place only to find out that my efforts were a waste of time. When you drop a nuke on the place it doesn't really open the mine. It starts an event called A Colossal Problem that takes place inside of the mine. I didn't know that I had to complete the event to complete the quest line and since I prefer to play Fallout by myself I decided to go to the mine instead of joining the event. Because the mine was in a blast zone fast travel was not available and because I have rarely participated in multiplayer events I didn't know that you could fast travel to the event using the map. When I finally reached the mine the event was no longer on the map and the mine was closed. I asked people on Reddit about this and they said that if the event fills up or is completed by other players it disappears from the map (https://www.reddit.com/r/fo76/comments/k1vmum/a_colossal_problem_event_disappears_from_map/). This leads me to believe that a group of players fast traveled to the event and either filled quota or completed it without me while I was moving on foot to the mine.

So, is this a bug or me just not knowing how to play? It may not be a bug by design but it is a design flaw none the less. To think that the person who triggers the event by completing part of a quest line cannot participate due to other people is unconscionable. There is no justifiable reason why an event should ever be rendered unavailable to the person that unlocks it. If the que fills up or is completed by other players that should not result in the event disappearing for the person that unlocked it. It should result in the event being available to just that person or that person's session being moved to another map where them joining unlocks the event for everyone there.