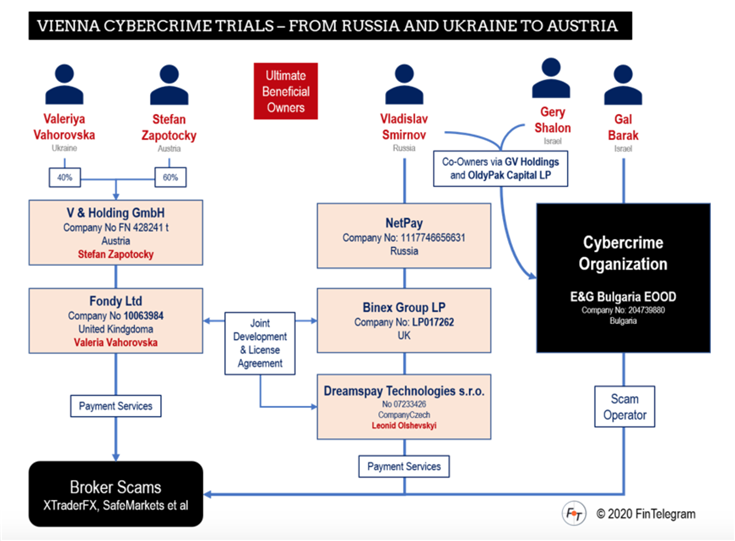 Unfortunately, the EU doesn’t have a federal law regime or federal courts. Hence, scammers must be charged and convicted separately in each EU member state in order to provide restitution payments to the victims of the respective country. To this extent, other European states are currently preparing charges against Gal Barak and his accomplices. Most of the money stolen via the scams like XTraderFX, SafeMarkets, Golden Markets, CryptoPoint, or OptionStars has not yet been recovered:

• more than €2 million have been seized with the Bulgarian Investbank;

• the ING subsidiary Payvision is said to have frozen and/or reserved several million that could be paid out to victims based on appropriate court orders;

The European Funds Recovery Initiative (EFRI) and its lawyers are already active in this regard.

Millions of victims of Gal Barak‘s XTraderFX et al broker scams have been processed via the UK FCA regulated Fondy Ltd, which handled credit and debit card payments for the scams. This company is controlled by the former head of the Vienna Stock Exchange, Stefan Zapotocky, and his Ukrainian partner Valeriya Vahorovska through V & A Holding GmbH (companies register record) in Vienna.

According to Fondy, the payment services for Barak’s scams would have been provided in cooperation with DreamsPay, a Czech payment processor owned and controlled by the Russian Vladislav Smirnov. Smirnov is a close partner of Gal Barak and a co-owner of the cybercrime organization around E&G Bulgaria and Tradologic. Smirnov has excellent contacts in Austria and maintained bank accounts with Austrian banks. In 2018, Meinl Bank issued a money laundering report against Smirnov and his Seychelles registered Keyring Holdings GmbH (see FinTelegram report here).

Stefan Zapotocky is the former head of the Vienna Stock Exchange and most recently worked on the Management Board of the European subsidiary of the Russian SBER Bank in Vienna. Besides that, he has been working for years as an advisor for the Austrian “oligarch” Ronny Pecik, who in turn is supported by Ukrainian oligarchs. Pecik and Zapotocky have been persons of interest for the U.S. CIA as a respective report available to FinTelegram suggests.

For sure, Zapotocky has the very best relations to Russia and Ukraine. His partner Valeriya Vahorovska is a Ukrainian living in Vienna and is a payment expert. Zapotocky has taken control of Fondy Ltd, which was founded by Vahorovska in 2014, in the course of the FCA registration in July 2016.

The partnership between DreamsPay, Binex, and Fondy was apparently managed by Smirnov’s Ukrainian CEO Leonid Olshevskyi.

It is incomprehensible why a regulated e-money institute like Fondy works as a payment processor for scams against the public warnings of various financial market supervisory authorities – also from the FCA. In any case, Fondy as well as Payvision must have the data about the money flow.