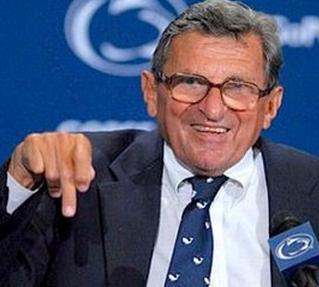 When Joe Paterno observed his employee Jerry Sandusky behaving inappropriately with a 10 year old he did the right thing and told his boss what he had seen. He did the right thing because like any good member of a unit he knew where to draw the line between reporting undesirable conduct and that complaining outside of the unit would be inappropriate because he had a duty to put the greater good of the unit above all else regardless of what any of his subordinates may have done.

In the movie A Few Good Men two defendants were on trial for their lives because they were good Marines who followed orders. They followed orders because they had a code that said "Unit, Corp, God, Country". If a man has a problem with someone in his unit he can complain to the man or his superior, if his superior has a problem that he cannot handle himself then he complains to his commanding officer, and so on. It is never acceptable to complain outside of the unit or break the chain of command. If your superior does not act as you wish then you have no right to go above or outside of him because doing so breaks the code. Now that might just be a movie, but it is based on a principal that is universal for all units no matter where they exist from corporate America to the military and football teams.

Joe Paterno did the right thing as an innocent bystander and a responsible member of a unit by complaining to his superior. He never went outside the chain of command because it is never ok to break the code to serve outsiders no matter what the circumstance and doing otherwise could cripple the unit as a whole. Responsibility for failing to act in this case should be placed squarely on the shoulders of Paterno's boss or his boss if informed.

Just testing the rating system locally by giving myself 4 stars.

What kind of example is this to back up your defense of Joe Pa? Don't you know how that movie ends? In case you forgot or never bothered to watch it in the first place those men were convicted of conduct unbecoming for what they did and the general was arrested for giving them the order because their code doesn't mean jack squat outside of a barracks as far as the real world is concerned. Then again maybe this is a good way to compare Joe Pa since his conduct doesn't look very becoming of a college football coach informed of a pedophile under his command. He is just as guilty as those men.